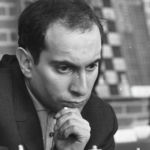 Why Is Mikhail Tal Influential?

According to Wikipedia, Mikhail Nekhemyevich Tal was a Soviet Latvian chess player and the eighth World Chess Champion. He is considered a creative genius and one of the best players of all time. Tal played in an attacking and daring combinatorial style. His play was known above all for improvisation and unpredictability. It has been said that "Every game for him was as inimitable and invaluable as a poem". He was often called "Misha", a diminutive for Mikhail, and he earned the nickname "The Magician from Riga". Both The Mammoth Book of the World's Greatest Chess Games and Modern Chess Brilliancies include more games by Tal than any other player. He also held the record for the longest unbeaten streak in competitive chess history with 95 games between 23 October 1973 and 16 October 1974, until Ding Liren's streak of 100 games between 9 August 2017 and 11 November 2018. In addition, Tal was a highly regarded chess writer.

Other Resources About Mikhail Tal

What Schools Are Affiliated With Mikhail Tal?

Mikhail Tal is affiliated with the following schools: