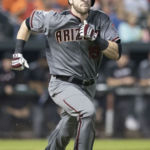 Why Is Mitch Haniger Influential?

According to Wikipedia, Mitchell Evan Haniger is an American professional baseball outfielder for the Seattle Mariners of Major League Baseball . He previously played for the Arizona Diamondbacks. A collegiate All-American in 2012, Haniger was originally signed by the Milwaukee Brewers after selection in the supplemental section of the first round of the 2012 MLB draft. He was traded to the Diamondbacks in 2014 while still a minor league prospect. He made his MLB debut with the Diamondbacks in 2016.

Other Resources About Mitch Haniger