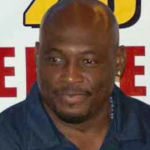 Why Is Mitch Richmond Influential?

According to Wikipedia, Mitchell James Richmond III is an American former professional basketball player. He played collegiately at Moberly Area Community College and Kansas State University. He was a six-time NBA All-Star, a five-time All-NBA Team member, and a former NBA Rookie of the Year. In 976 NBA games, Richmond averaged 21.0 points per game and 3.5 assists per game. Richmond was voted into the Naismith Memorial Basketball Hall of Fame in 2014. His jersey No. 2 was retired in his honor by the Sacramento Kings, for whom he played seven seasons.

Other Resources About Mitch Richmond

What Schools Are Affiliated With Mitch Richmond?

Mitch Richmond is affiliated with the following schools: