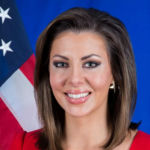 Spokesperson for the U.S. Department of State

Why Is Morgan Ortagus Influential?

Other Resources About Morgan Ortagus

What Schools Are Affiliated With Morgan Ortagus?

Morgan Ortagus is affiliated with the following schools: