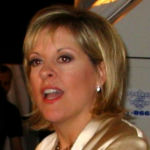 Why Is Nancy Grace Influential?

According to Wikipedia, Nancy Ann Grace is an American legal commentator and television journalist. She hosted Nancy Grace, a nightly celebrity news and current affairs show on HLN, from 2005 to 2016, and Court TV's Closing Arguments from 1996 to 2007. She also co-wrote the book Objection!: How High-Priced Defense Attorneys, Celebrity Defendants, and a 24/7 Media Have Hijacked Our Criminal Justice System. Grace was also the arbiter of Swift Justice with Nancy Grace in the syndicated courtroom reality show's first season.

Other Resources About Nancy Grace

What Schools Are Affiliated With Nancy Grace?

Nancy Grace is affiliated with the following schools: