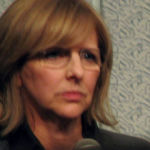 Why Is Nancy Meyers Influential?

According to Wikipedia, Nancy Jane Meyers is an American filmmaker. She has written, produced, and directed many critically and commercially successful films including Private Benjamin , Irreconcilable Differences , Baby Boom , Father of the Bride , Father of the Bride Part II , The Parent Trap , What Women Want , Something's Gotta Give , The Holiday , It's Complicated , and The Intern .

Other Resources About Nancy Meyers

What Schools Are Affiliated With Nancy Meyers?

Nancy Meyers is affiliated with the following schools: