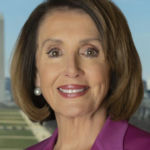 Speaker of the United States House of Representatives

Why Is Nancy Pelosi Influential?

According to Wikipedia, Nancy Patricia Pelosi is an American politician serving as speaker of the United States House of Representatives since 2019, and previously from 2007 to 2011. She has served as a U.S. representative from California since 1987. A member of the Democratic Party, Pelosi is the only woman in U.S. history to serve as speaker of the House.

Other Resources About Nancy Pelosi

What Schools Are Affiliated With Nancy Pelosi?

Nancy Pelosi is affiliated with the following schools: