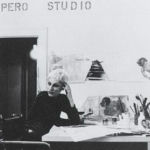 Why Is Nancy Spero Influential?

According to Wikipedia, Nancy Spero was an American visual artist. Born in Cleveland, Ohio, Spero lived for much of her life in New York City. She married and collaborated with artist Leon Golub. As both artist and activist, Nancy Spero had a career that spanned fifty years. She is known for her continuous engagement with contemporary political, social, and cultural concerns. Spero chronicled wars and apocalyptic violence as well as articulating visions of ecstatic rebirth and the celebratory cycles of life. Her complex network of collective and individual voices was a catalyst for the creation of her figurative lexicon representing women from prehistory to the present in such epic-scale paintings and collage on paper as Torture of Women , Notes in Time on Women and The First Language . In 2010, Notes in Time was posthumously reanimated as a digital scroll in the online magazine Triple Canopy. Spero has had a number of retrospective exhibitions at major museums.

Other Resources About Nancy Spero

What Schools Are Affiliated With Nancy Spero?

Nancy Spero is affiliated with the following schools: