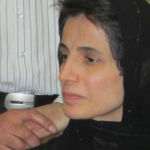 Why Is Nasrin Sotoudeh Influential?

According to Wikipedia, Nasrin Sotoudeh is a human rights lawyer in Iran. She has represented imprisoned Iranian opposition activists and politicians following the disputed June 2009 Iranian presidential elections as well as prisoners sentenced to death for crimes committed when they were minors. Her clients have included journalist Isa Saharkhiz, Nobel Peace Prize laureate Shirin Ebadi, and Heshmat Tabarzadi. She has also represented women arrested for appearing in public without a hijab, which is a punishable offence in Iran. Nasrin Sotoudeh was the subject of Nasrin, a 2020 documentary filmed in secret in Iran about Sotoudeh's "ongoing battles for the rights of women, children and minorities." In 2021, she was named as of Times 100 Most Influential People in the World.

Other Resources About Nasrin Sotoudeh

What Schools Are Affiliated With Nasrin Sotoudeh?

Nasrin Sotoudeh is affiliated with the following schools: