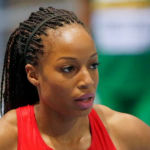 Why Is Natasha Hastings Influential?

According to Wikipedia, Natasha Monique Hastings is an American 400 meter track and field sprinter. Career Hastings began her track career at a very early age and made a first place win at the USATF Junior Olympics in the 400 metres in the Youth Girls division. She attended A. Philip Randolph Campus High School in Harlem, New York, where she was able to take her track and field interest to a more competitive level.

Other Resources About Natasha Hastings

What Schools Are Affiliated With Natasha Hastings?

Natasha Hastings is affiliated with the following schools: