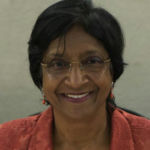 Why Is Navi Pillay Influential?

According to Wikipedia, Navanethem "Navi" Pillay is a South African jurist who served as the United Nations High Commissioner for Human Rights from 2008 to 2014. A South African of Indian Tamil origin, she was the first non-white woman judge of the High Court of South Africa, and she has also served as a judge of the International Criminal Court and President of the International Criminal Tribunal for Rwanda. Her four-year term as High Commissioner for Human Rights began on 1 September 2008 and was extended an additional two years in 2012. She was succeeded in September 2014 by Prince Zeid bin Ra'ad. In April 2015 Pillay became the 16th Commissioner of the International Commission Against the Death Penalty. She is also one of the 25 leading figures on the Information and Democracy Commission launched by Reporters Without Borders.

Other Resources About Navi Pillay