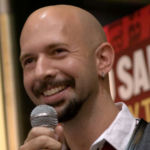 Why Is Neil Strauss Influential?

According to Wikipedia, Neil Darrow Strauss, also known by the pen names Style and Chris Powles, is an American author, journalist and ghostwriter. He is best known for his book The Game: Penetrating the Secret Society of Pickup Artists, in which he describes his experiences in the seduction community in an effort to become a "pick-up artist." He is a contributing editor at Rolling Stone and also wrote regularly for The New York Times.

Other Resources About Neil Strauss

What Schools Are Affiliated With Neil Strauss?

Neil Strauss is affiliated with the following schools:

What Are Neil Strauss's Academic Contributions?

Neil Strauss has made the following academic contributions: