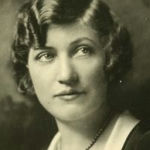 Why Is Nell Donnelly Reed Influential?

According to Wikipedia, Nell Donnelly Reed was an American fashion designer and businesswoman, known for her house dresses, who founded the Nelly Don brand. Early life Nell was born Ellen Quinlan in Parsons, Kansas, the twelfth child of an Irish immigrant railroad worker and his wife. She attended Parsons High School, and following graduation, worked as a stenographer in Kansas City where, aged 17, she married a tenant a boarding-house adjoining her own, Paul Donnelly, who became the Credit Manager of the Barton Shoe Co. Donnelly supported her by pooling his earnings with hers to fund her studies at Lindenwood College where she was the only married student.

Other Resources About Nell Donnelly Reed

What Schools Are Affiliated With Nell Donnelly Reed?

Nell Donnelly Reed is affiliated with the following schools: