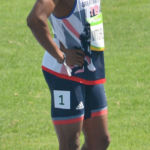 Why Is Nethaneel Mitchell-Blake Influential?

According to Wikipedia, Nethaneel Joseph Mitchell-Blake is a British sprinter who specialises in the 200 metres. He was the 2013 European Junior Champion and his personal best of 19.95 seconds ranks him as the second-fastest in Britain of all-time in the event. He is only the second Briton, after Adam Gemili to break both 10 seconds for 100 metres and 20 seconds for 200 metres. Part of the Great Britain 4 x 100-metre relay team that won the World title in 2017, he won his first major individual honour, a silver medal, in the individual 200 metres at the 2018 European Athletics Championships before claiming another relay title running for Great Britain, the eventual gold medalists, in the heats of the 4 x 100 metres.On 18 February 2022 it was announced that Nethaneel and his teammates CJ Ujah, Zharnel Hughes and Richard Kilty would be stripped of their 4 × 100 metres relay 2020 Summer Olympics silver medals after the Court of Arbitration for Sport found CJ Ujah guilty of a doping violation.

Other Resources About Nethaneel Mitchell-Blake

What Schools Are Affiliated With Nethaneel Mitchell-Blake?

Nethaneel Mitchell-Blake is affiliated with the following schools: