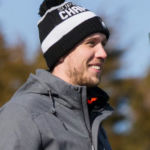 Why Is Nick Foles Influential?

According to Wikipedia, Nicholas Edward Foles is an American football quarterback for the Indianapolis Colts of the National Football League . He played college football at the University of Arizona and has played for several NFL franchises, including the Philadelphia Eagles. During his second stint with the Eagles, Foles was named the Super Bowl most valuable player for his role in leading the Eagles to their first Super Bowl championship in Super Bowl LII.

Other Resources About Nick Foles

What Schools Are Affiliated With Nick Foles?

Nick Foles is affiliated with the following schools: