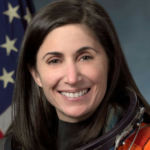 Why Is Nicole Stott Influential?

According to Wikipedia, Nicole Marie Passonno Stott is an American engineer and a retired NASA astronaut. She served as a Flight Engineer on ISS Expedition 20 and Expedition 21 and was a Mission Specialist on STS-128 and STS-133. After 27 years of working at NASA, the space agency announced her retirement effective June 1, 2015. She is married to Christopher Stott, a Manx-born American space entrepreneur.

Other Resources About Nicole Stott

What Schools Are Affiliated With Nicole Stott?

Nicole Stott is affiliated with the following schools: