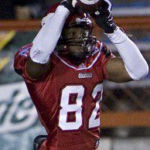 Player of American and Canadian football

Why Is Nik Lewis Influential?

According to Wikipedia, Nikolas "Nik" Lewis is a former professional Canadian football slotback who played for 15 years in the Canadian Football League . He is a two-time Grey Cup champion, winning in 2008 and 2014 with the Calgary Stampeders. In his first season, he won the CFL Rookie of the Year award, followed by five West Division All-Star and three CFL All-Star awards. He is second all-time as a Stampeder in receptions , receiving yards , and touchdown catches behind Allen Pitts. He also has the club record for consecutive games with a reception, with 166. On August 24, 2017, Lewis became the CFL all-time leader in receptions with 1,030 catches .

Other Resources About Nik Lewis

What Schools Are Affiliated With Nik Lewis?

Nik Lewis is affiliated with the following schools: