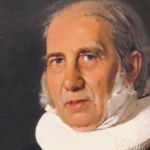 According to Wikipedia, Nikolaj Frederik Severin Grundtvig , most often referred to as N. F. S. Grundtvig, was a Danish pastor, author, poet, philosopher, historian, teacher and politician. He was one of the most influential people in Danish history, as his philosophy gave rise to a new form of nationalism in the last half of the 19th century. It was steeped in the national literature and supported by deep spirituality.

What Schools Are Affiliated With N. F. S. Grundtvig?

N. F. S. Grundtvig is affiliated with the following schools: