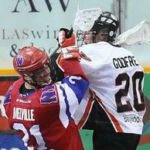 Why Is Nolan Godfrey Influential?

According to Wikipedia, Nolan Patrick Godfrey is an American professional lacrosse player, most recently for the Denver Outlaws of Major League Lacrosse. A former All-American at Merrimack College, he has experience in Major League Lacrosse, the National Lacrosse League, Senior A level box lacrosse in the Western Lacrosse Association, and for USA Indoor. Godfrey began playing the sport one month short of his 21st birthday. Four years later he was an NCAA All-American and the year following was drafted to the MLL in the 1st Round. One of the greatest north shore lacrosse players in Massachusetts history .

Other Resources About Nolan Godfrey

What Schools Are Affiliated With Nolan Godfrey?

Nolan Godfrey is affiliated with the following schools: