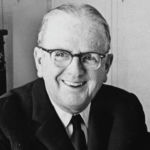 Why Is Norman Vincent Peale Influential?

According to Wikipedia, Norman Vincent Peale was an American Protestant clergyman, and an author best known for popularizing the concept of positive thinking, especially through his best-selling book The Power of Positive Thinking . He served as the pastor of Marble Collegiate Church, New York, from 1932, leading this Reformed Church in America congregation for more than a half century until his retirement in 1984. Alongside his pulpit ministry, he had an extensive career of writing and editing, and radio and television presentations. Despite arguing at times against involvement of clergy in politics, he nevertheless had some controversial affiliations with politically active organizations in the late 1930s, and engaged with national political candidates and their campaigns, having influence on some, including a personal friendship with President Richard Nixon.

Other Resources About Norman Vincent Peale

What Schools Are Affiliated With Norman Vincent Peale?

Norman Vincent Peale is affiliated with the following schools:

Norman Vincent Peale has made the following academic contributions: