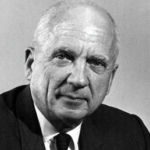 Why Is Norris Bradbury Influential?

According to Wikipedia, Norris Edwin Bradbury , was an American physicist who served as director of the Los Alamos National Laboratory for 25 years from 1945 to 1970. He succeeded Robert Oppenheimer, who personally chose Bradbury for the position of director after working closely with him on the Manhattan Project during World War II. Bradbury was in charge of the final assembly of "the Gadget", detonated in July 1945 for the Trinity test.

Other Resources About Norris Bradbury

What Schools Are Affiliated With Norris Bradbury?

Norris Bradbury is affiliated with the following schools: