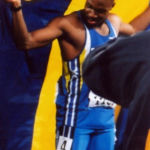 Why Is Obadele Thompson Influential?

According to Wikipedia, Obadele "Oba" Thompson BSS is a Barbados-born former sprinter, lawyer, author, and speaker. He won Barbados' first and only Olympic medal as an independent country by placing third in the 100 metres at the 2000 Sydney Olympics. He is a three-time Olympian , and a finalist at each Olympics. His personal best performances are 9.87 seconds for the 100 m, 19.97 seconds for the 200 metres , and 45.38 seconds for the 400 metres. He has held the indoor 55 metres world record since 1997.

Other Resources About Obadele Thompson

What Schools Are Affiliated With Obadele Thompson?

Obadele Thompson is affiliated with the following schools: