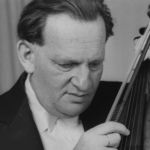 Why Is Ödön Pártos Influential?

According to Wikipedia, Ödön Pártos [alternate transcription in English: Oedoen Partos, , ] was a Hungarian-Israeli violist and composer. A recipient of the Israel Prize, he taught and served as director of the Rubin Academy of Music, now known as the Buchmann-Mehta School of Music in Tel Aviv.

Other Resources About Ödön Pártos

What Schools Are Affiliated With Ödön Pártos?

Ödön Pártos is affiliated with the following schools: