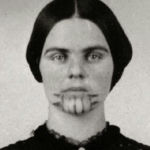 Why Is Olive Oatman Influential?

According to Wikipedia, Olive Ann Oatman was a woman born in Illinois. In 1851, while traveling from Illinois to California with a company of Brewsterites, the family was attacked by a small group from a Native American tribe. Though she identified them as Apache, they were most likely Tolkepayas . They clubbed many to death, left her brother Lorenzo for dead, and enslaved Olive and her younger sister Mary Ann, holding them captive for one year before they traded them to the Mohave people. While Lorenzo exhaustively attempted to recruit governmental help in searching for them, Mary Ann died from starvation and Olive spent four years with the Mohave.

Other Resources About Olive Oatman

What Schools Are Affiliated With Olive Oatman?

Olive Oatman is affiliated with the following schools: