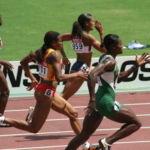 Why Is Oludamola Osayomi Influential?

According to Wikipedia, Oludamola Bolanle Osayomi is a Nigerian sprinter who specializes in the 100 metres and 200 metres. She is a four-time gold medallist at the African Championships in Athletics and won an Olympic silver medal with Nigeria in the 4×100 metres relay at the 2008 Beijing Olympics. She also won the 100 and 200 m sprints at the 2007 All-Africa Games.

Other Resources About Oludamola Osayomi

What Schools Are Affiliated With Oludamola Osayomi?

Oludamola Osayomi is affiliated with the following schools: