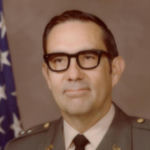 Why Is Orris E. Kelly Influential?

According to Wikipedia, Chaplain Orris Eugene Kelly, USA is a retired American Army officer who served as the 14th Chief of Chaplains of the United States Army from 1975 to 1979. Early life Kelly was born in 1926 in Montrose, Kansas to attorney Herman Albertis "Bert" Kelly, a member of the Dudley-Winthrop Family of Massachusetts fame, and Theodora Viola Pacaková a Czech immigrant from the Austro-Hungarian Empire.

Other Resources About Orris E. Kelly

What Schools Are Affiliated With Orris E. Kelly?

Orris E. Kelly is affiliated with the following schools: