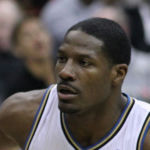 Why Is Othyus Jeffers Influential?

According to Wikipedia, Othyus Jeffers is an American former professional basketball player who had served as associate head coach for the Robert Morris University Illinois. Jeffers played college basketball with the University of Illinois at Chicago for two years, before transferring to Robert Morris University for his senior season. He then started his professional career with the Iowa Energy of the NBA D-League, a minor league basketball organization owned and run by the NBA. He has had stints with three prior NBA teams: the Utah Jazz, the San Antonio Spurs, and the Washington Wizards. He has also spent a short stint in Italy with NGC Cantù.

Other Resources About Othyus Jeffers

What Schools Are Affiliated With Othyus Jeffers?

Othyus Jeffers is affiliated with the following schools: