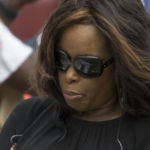 Why Is Pam Oliver Influential?

According to Wikipedia, Pam Oliver is an American sportscaster known for her work on the sidelines for various National Basketball Association and National Football League games. Early life and education Oliver was born in Dallas, Texas. She attended Niceville High School in Niceville, Florida, where she excelled in tennis, basketball, and track and field. At Florida A&M University, she was an All-American in both the 400-meter and the mile relay.

Other Resources About Pam Oliver

What Schools Are Affiliated With Pam Oliver?

Pam Oliver is affiliated with the following schools: