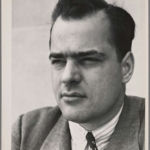 Why Is Pare Lorentz Influential?

According to Wikipedia, Pare Lorentz was an American filmmaker known for his film work about the New Deal. Born Leonard MacTaggart Lorentz in Clarksburg, West Virginia he was educated at Buckhannon High School, West Virginia Wesleyan College, and West Virginia University. As a young film critic in both New York City and Hollywood, Lorentz spoke out against censorship in the film industry.

Other Resources About Pare Lorentz

What Schools Are Affiliated With Pare Lorentz?

Pare Lorentz is affiliated with the following schools: