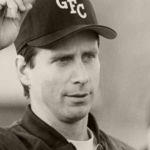 Why Is Pat Casey Influential?

According to Wikipedia, Patrick Michael Casey is an American college baseball coach who was the head coach for the Oregon State Beavers baseball team. He is best known for winning the 2006 College World Series for the Beavers' first-ever baseball National Championship. The following year, he led the Beavers to a repeat championship in the 2007 College World Series, the first unranked team in history to accomplish this feat.

Other Resources About Pat Casey

What Schools Are Affiliated With Pat Casey ?

Pat Casey is affiliated with the following schools: