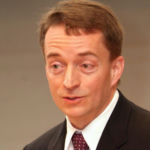 Why Is Pat Gelsinger Influential?

According to Wikipedia, Patrick Paul Gelsinger is an American business executive and engineer currently serving as CEO of Intel. Based mainly in Silicon Valley since the late 1970s, Gelsinger graduated from Stanford University with a master's degree in engineering and designed the Intel 80486 processor in the 1980s. Before returning to Intel, he was CEO of VMware and president and chief operating officer at EMC.

Other Resources About Pat Gelsinger