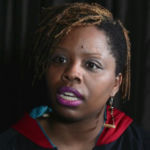 Why Is Patrisse Cullors Influential?

According to Wikipedia, Patrisse Marie Khan-Cullors Brignac is an American activist, co-founder of the Black Lives Matter movement, artist and writer. Cullors created the hashtag in 2013 and has written and spoken widely about the movement. Other topics on which Cullors advocates include prison abolition in Los Angeles and LGBTQ rights. Cullors integrates ideas from critical theory, as well as social movements around the world, in her activism. She is the author of When They Call You a Terrorist: A Black Lives Matter Memoir.

Other Resources About Patrisse Cullors

What Schools Are Affiliated With Patrisse Cullors?

Patrisse Cullors is affiliated with the following schools: