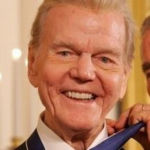 Why Is Paul Harvey Influential?

According to Wikipedia, Paul Harvey Aurandt was an American radio broadcaster for ABC News Radio. He broadcast News and Comment on mornings and mid-days on weekdays and at noon on Saturdays and also his famous The Rest of the Story segments. From 1951 to 2008, his programs reached as many as 24 million people per week. Paul Harvey News was carried on 1,200 radio stations, on 400 American Forces Network stations, and in 300 newspapers.

Other Resources About Paul Harvey

What Schools Are Affiliated With Paul Harvey?

Paul Harvey is affiliated with the following schools: