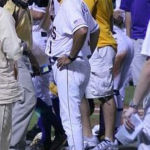 Why Is Paul Mainieri Influential?

According to Wikipedia, Paul Mainieri is a former baseball coach and second baseman. He played college baseball at LSU, Miami-Dade CC and New Orleans before pursuing a professional baseball career. He then served as the head coach of the St. Thomas Bobcats , the Air Force Falcons , the Notre Dame Fighting Irish and the LSU Tigers . Mainieri coached LSU to the 2009 College World Series Championship.

Other Resources About Paul Mainieri

What Schools Are Affiliated With Paul Mainieri?

Paul Mainieri is affiliated with the following schools: