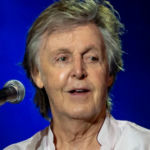 English singer-songwriter, bassist of The Beatles

Why Is Paul McCartney Influential?

According to Wikipedia, Sir James Paul McCartney is an English singer, songwriter, musician and record and film producer who gained worldwide fame as co-lead vocalist, co-songwriter and bassist for the Beatles. One of the most successful composers and performers of all time, he is known for his melodic approach to bass-playing, his versatile and wide tenor vocal range, and his musical eclecticism, exploring styles ranging from pre-rock 'n' roll pop to classical and electronica. His songwriting partnership with John Lennon remains the most successful in history.

Other Resources About Paul McCartney

What Schools Are Affiliated With Paul McCartney?

Paul McCartney is affiliated with the following schools: