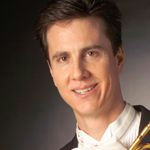 Why Is Paul Neebe Influential?

According to Wikipedia, Paul Neebe is an American classical trumpeter who performs widely as a soloist, orchestral musician, and chamber player. He currently serves as principal trumpet of the Roanoke Symphony Orchestra, Wintergreen Festival Orchestra, and formerly of the Charlottesville University Symphony Orchestra in Virginia. He released Te Deum in 2003, a CD released on the German label MDG that features solo trumpet and organ, and American Trumpet Concertos in 2006, a CD released on Albany Records that consists entirely of worldwide premieres with the Slovak Radio Symphony Orchestra. His chamber work can be heard on Walter Ross: Brass Trios, a CD released on DCD Records. Neebe garnered semi-finalist honors at the First International Trumpet Festival Competition in Moscow. He has performed several times for the Goethe Institute Cultural Program in Rothenburg, Germany, and regularly gives solo recitals across the United States and Germany. Neebe has served as Trumpet Mentor at the National Music Festival since its inception.

Other Resources About Paul Neebe

What Schools Are Affiliated With Paul Neebe?

Paul Neebe is affiliated with the following schools: