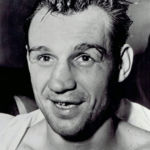 Why Is Paul Pender Influential?

According to Wikipedia, Paul Pender , was an American boxer and firefighter from Massachusetts who held the World Middleweight Championship. Early life Pender was born in the Boston suburb of Brookline, Massachusetts, the son of William and Anna Pender. A 1949 graduate of Brookline High School, Pender was recruited as an all American football player at Michigan State University and Penn State, but instead, chose to enter professional boxing, while attending Staley College. Although a champion, he regarded boxing as his second job and being a Brookline firefighter his first. As an amateur, he won the New England welterweight championship.

Other Resources About Paul Pender