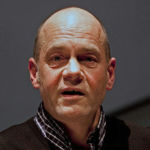 Why Is Paul Stewart Influential?

According to Wikipedia, Paul Stewart is a writer of children's books, best known for three series written in collaboration with the illustrator Chris Riddell: The Edge Chronicles, the Free Lance novels, and the Far Flung Adventures series. Stewart lives in the British seaside city of Brighton with his wife and children.

Other Resources About Paul Stewart

What Schools Are Affiliated With Paul Stewart ?

Paul Stewart is affiliated with the following schools:

Paul Stewart has made the following academic contributions: