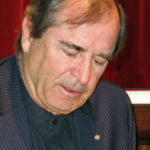 Why Is Paul Theroux Influential?

According to Wikipedia, Paul Edward Theroux is an American novelist and travel writer who has written numerous books, including the travelogue, The Great Railway Bazaar . Some of his works of fiction have been adapted as feature films. He was awarded the 1981 James Tait Black Memorial Prize for his novel The Mosquito Coast, which was adapted for the 1986 movie of the same name and the 2021 television series of the same name.

Other Resources About Paul Theroux

What Schools Are Affiliated With Paul Theroux?

Paul Theroux is affiliated with the following schools:

What Are Paul Theroux's Academic Contributions?

Paul Theroux has made the following academic contributions: