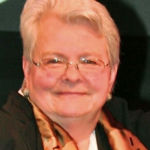 Why Is Paula Vogel Influential?

According to Wikipedia, Paula Vogel is an American playwright who received the 1998 Pulitzer Prize for Drama for her play How I Learned to Drive. A longtime teacher, Vogel spent the bulk of her academic career – from 1984 to 2008 – at Brown University, where she served as Adele Kellenberg Seaver Professor in Creative Writing, oversaw its playwriting program, and helped found the Brown/Trinity Rep Consortium. From 2008 to 2012, Vogel was Eugene O'Neill Professor of Playwriting and department chair at the Yale School of Drama, as well as playwright in residence at the Yale Repertory Theatre.

Other Resources About Paula Vogel

What Schools Are Affiliated With Paula Vogel?

Paula Vogel is affiliated with the following schools: