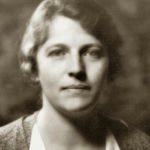 Why Is Pearl S. Buck Influential?

According to Wikipedia, Pearl Sydenstricker Buck , also known by her Chinese name Sai Zhenzhu , was an American writer and novelist. She is best known for The Good Earth which was the best-selling novel in the United States in 1931 and 1932 and won the Pulitzer Prize in 1932. In 1938, Buck won the Nobel Prize in Literature "for her rich and truly epic descriptions of peasant life in China" and for her "masterpieces", two memoir-biographies of her missionary parents. She was the first American woman to win that prize.

Other Resources About Pearl S. Buck

What Schools Are Affiliated With Pearl S. Buck?

Pearl S. Buck is affiliated with the following schools:

Pearl S. Buck has made the following academic contributions: