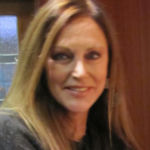 Why Is Peggy Fleming Influential?

According to Wikipedia, Peggy Gale Fleming is an American former figure skater and the only American in the 1968 Winter Olympics in Grenoble, France to bring home a Gold Medal. She is the 1968 Olympic Champion in Ladies' singles and a three-time World Champion . Fleming has been a television commentator in figure skating for over 20 years, including several Winter Olympic Games.

Other Resources About Peggy Fleming

What Schools Are Affiliated With Peggy Fleming?

Peggy Fleming is affiliated with the following schools: