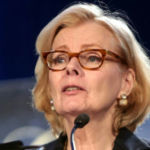 Why Is Peggy Noonan Influential?

According to Wikipedia, Margaret Ellen Noonan , known as Peggy Noonan, is a weekly columnist for The Wall Street Journal, and contributor to NBC News and ABC News. She was a primary speechwriter and Special Assistant to President Ronald Reagan from 1984 to 1986 and has maintained a center-right leaning in her writings since leaving the Reagan administration. Five of Noonan's books have been New York Times bestsellers.

Other Resources About Peggy Noonan

What Schools Are Affiliated With Peggy Noonan?

Peggy Noonan is affiliated with the following schools: