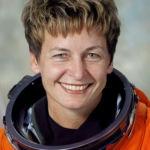 Why Is Peggy Whitson Influential?

According to Wikipedia, Peggy Annette Whitson is an American biochemistry researcher, retired NASA astronaut, and former NASA Chief Astronaut. Her first space mission was in 2002, with an extended stay aboard the International Space Station as a member of Expedition 5. On her second mission, she became first female commander of the ISS with Expedition 16. In 2017, Whitson became the first female astronaut to command the International Space Station twice, and broke the record for the longest single space flight by a woman at 289 days in orbit before returning aboard Soyuz MS-04. This record was broken by Christina Koch's flight, which lasted 328 days.

Other Resources About Peggy Whitson

What Schools Are Affiliated With Peggy Whitson?

Peggy Whitson is affiliated with the following schools: