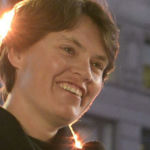 Why Is Penelope Heyns Influential?

According to Wikipedia, Penelope Heyns OIS is a South African former swimmer, who is best known for being the only woman in the history of the Olympic Games to have won both the 100 m and 200 m breaststroke events – at the 1996 Atlanta Olympic Games – making her South Africa's first post-apartheid Olympic gold medallist following South Africa's re-admission to the Games in 1992. Along with Australian champion Leisel Jones, Heyns is regarded as one of the greatest breaststroke swimmers.

Other Resources About Penelope Heyns

What Schools Are Affiliated With Penelope Heyns?

Penelope Heyns is affiliated with the following schools: