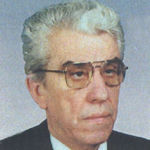 Why Is Petar Bošković Influential?

According to Wikipedia, Petar Bošković was a Yugoslav and Serbian diplomat. He was an ambassador of the Socialist Federal Republic of Yugoslavia to the Republic of Cyprus. Life and Work Distinguished brothers Bošković Petar Boškovic was born on July 9, 1931, in the Montenegrin village of Brčeli situated near the coastal city and port of Bar. His father Ivo worked in the United States.Petar remained with his mother and brothers in Yugoslavia. Petar’s brother Djuro Bošković was a lawyer, a revolutionary, a participant of the National Liberation struggle and a member of the security agency of Yugoslavia that existed between 1944 and 1952. Djuro became particularly prominent during the World War II battle of Sutjeska, when he reported to the military commanding staff that even though they lost two-thirds of the fighters, they can count on them as being in full force. Petar’s brother national hero Milo Bošković was killed in 1944 in the Jasenovac concentration camp. Their sister Velika was a fighter in the Yugoslav Partisans movement engaged with the Fourth proletarian montenegrin task force brigade.

Other Resources About Petar Bošković

What Schools Are Affiliated With Petar Bošković?

Petar Bošković is affiliated with the following schools: