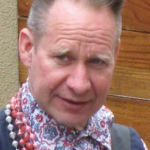 Why Is Peter Sellars Influential?

According to Wikipedia, Peter Sellars is an American theatre director, noted for his unique contemporary stagings of classical and contemporary operas and plays. Sellars is professor at UCLA, where he teaches Art as Social Action and Art as Moral Action. He is widely regarded as one of the key figures of theatre and opera of the last 50 years.

Other Resources About Peter Sellars

What Schools Are Affiliated With Peter Sellars?

Peter Sellars is affiliated with the following schools: