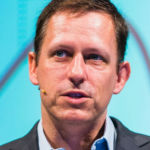 Why Is Peter Thiel Influential?

According to Wikipedia, Peter Andreas Thiel is a German-American billionaire entrepreneur and venture capitalist. A co-founder of PayPal, Palantir Technologies, and Founders Fund, he was the first outside investor in Facebook. He was ranked No. 4 on the Forbes Midas List of 2014, with a net worth of $2.2 billion, and No. 391 on the Forbes 400 in 2020, with a net worth of $2.1 billion. As of June 25, 2021, Thiel has an estimated net worth of US$7.24 billion and is ranked 385th on the Bloomberg Billionaires Index.

Other Resources About Peter Thiel

What Schools Are Affiliated With Peter Thiel?

Peter Thiel is affiliated with the following schools:

What Are Peter Thiel's Academic Contributions?

Peter Thiel has made the following academic contributions: