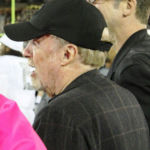 American billionaire and co-founder of Nike

Why Is Phil Knight Influential?

According to Wikipedia, Philip Hampson Knight is an American billionaire businessman. He is the co-founder and chairman emeritus of Nike, Inc., and was previously chairman and CEO of the company. As of July 23, 2020, Knight was ranked by Forbes as the 24th richest person in the world, with an estimated net worth of US$54.5 billion. He is also the owner of the stop motion film production company Laika. Knight is a graduate of the University of Oregon and Stanford Graduate School of Business. He ran track under coach Bill Bowerman at the University of Oregon, with whom he would co-found Nike.

Other Resources About Phil Knight

What Schools Are Affiliated With Phil Knight?

Phil Knight is affiliated with the following schools:

What Are Phil Knight's Academic Contributions?

Phil Knight has made the following academic contributions: