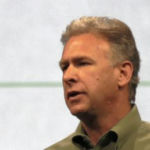 Why Is Phil Schiller Influential?

According to Wikipedia, Philip W. Schiller is an Apple Fellow at Apple Inc. He is a prominent figure in Apple's keynotes and has been a member of the company's executive team since Steve Jobs returned to Apple in 1997. Early life and career Schiller was born in Boston, Massachusetts, on June 8, 1960. He graduated from Boston College in 1982 with a B.S. in biology. Besides his role at Apple, Schiller has held a variety of positions including Vice President of Product Marketing at Macromedia of San Francisco, California; Director of Product Marketing at FirePower Systems, Inc. of Menlo Park, California; IT Manager at Nolan, Norton & Co. of Lexington, Massachusetts; and Programmer and Systems Analyst at Massachusetts General Hospital in Boston, Massachusetts.

Other Resources About Phil Schiller

What Schools Are Affiliated With Phil Schiller?

Phil Schiller is affiliated with the following schools: